In this journey I'll be your guide into how to deploy your laravel application to multiple servers using CI and pipelines that will make your life so much easier and allow you to achieve zero-downtime deployments.

This is a detailed technical how-to guide, though I'll use simple words to describe most of the complicated technical terms. It also designed to be copy-paste friendly as you go! 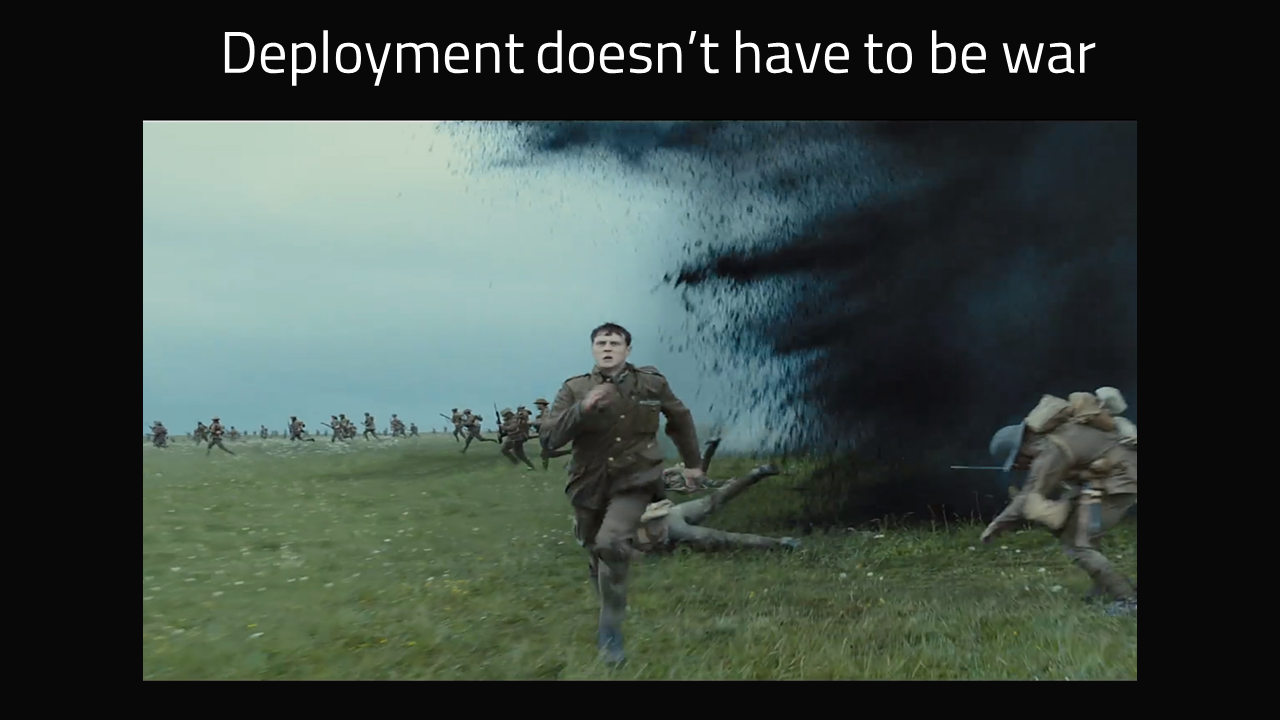 In this section we'll:

First Things first, you'll need ssh access to the server/droplet, cd into your home dir or to the path where do you want the files to be deployed typically in /home/example.com/public_html/ then create new folder "production".

This is an optional step if your project already on bitbucket skip a head to the next step.

Create master branch or production branch whatever suites you best. Anything will be pushed into that branch will trigger a deployment pipeline that will use the environments variables bellow. 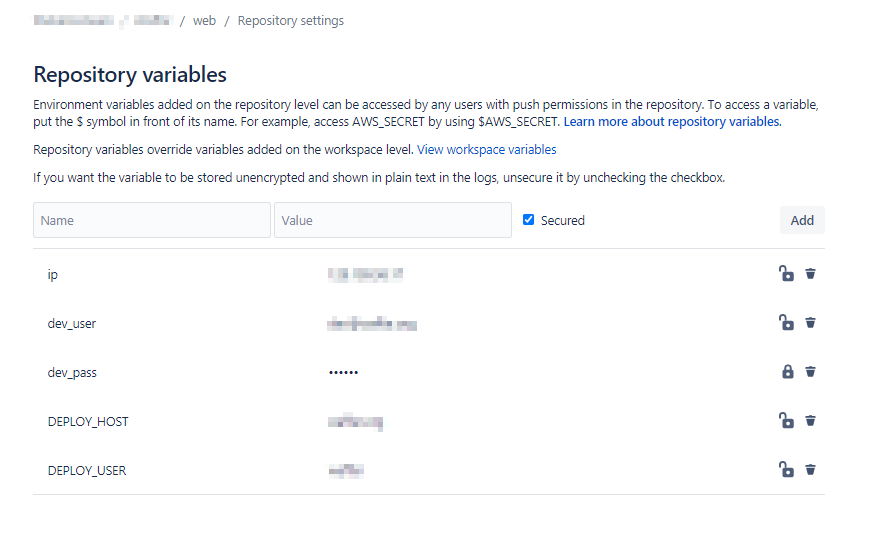 Do not configure DEPLOY_USER as root. It's not recommended, use user with limited permissions just for the deployment process and only have access to site folder.

Next configure deployment environments (staging and/or production) in Deployments tap, configure DEPLOY_PATH with the path up to the production folder. 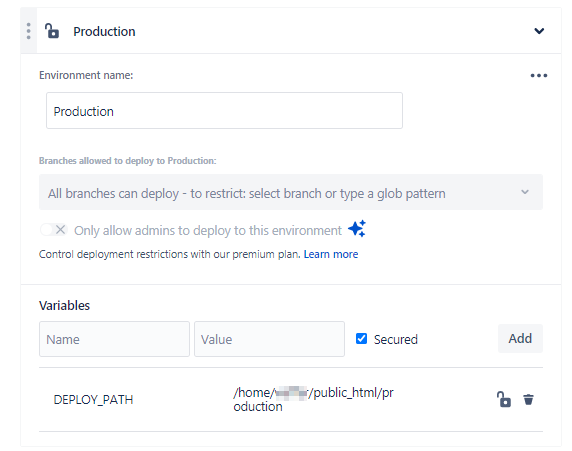 Next, you need to let bitbucket have restrected access to the server. Navigate to SSH Keys tap, generate new key if you haven't, copy public key into .ssh/authorized_keys file in your deployment user base directory on the server for example if your user called "example" the .ssh folder will most likely be in /home/example/.ssh.

I spent hours debug this one so hear me out, dont copy the public key into the server's base .ssh key because then bitbucket will not have permission to access the deployment user!

If for some reason .ssh doesn't exist it's easy to generate one!

You'll be prompt Enter file in which to save the key (/home/example/.ssh/id_rsa): just make sure to set the correct path.

Next head up to your project base directory and create bitbucket-pipeline.yaml file. For now just copy paste (opens new window), stick around if you want to know all about this file 😃

The file you just copied contains 2 environments staging and production feel free to mess around with it after reading this section!

Next create Envoy.blade.php file in your project base directory. Again for now just copy paste (opens new window) you dont have to configure anything for now it will out of the box for now. Skip to the file contents here.

I spend many hours with this strange error where apache server wasn't able to read storage folder and only display cached version of the app because it wasn't following the symbolic link production/current. 25 Cup of coffer later, I found that I forgot to setup this line in .htaccess in my base public_html directory.

This line will make apache load the symbolic link directly.

# How these all things tie together?

Let's take a step back and take a look on how this whole thing works. But first let's understand in any server/environment these commands will be executed. 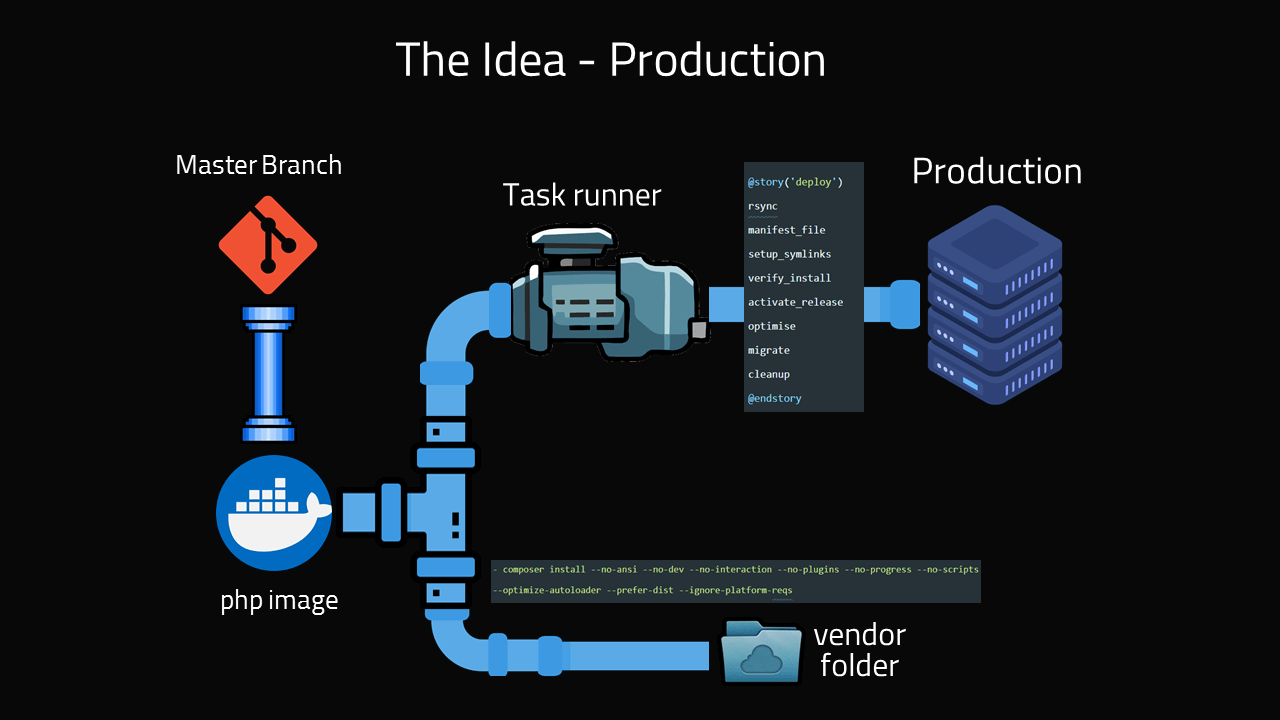 1- When you push new code to master branch or your main branch. Pipeline will pickup on it and trigger deployment processes defined in bitbucket-pipeline.yaml.

3- Next, will run a task runner called Envoy (opens new window) that will run tasks defined in Envoy.blade.php on both pipeline and your server. 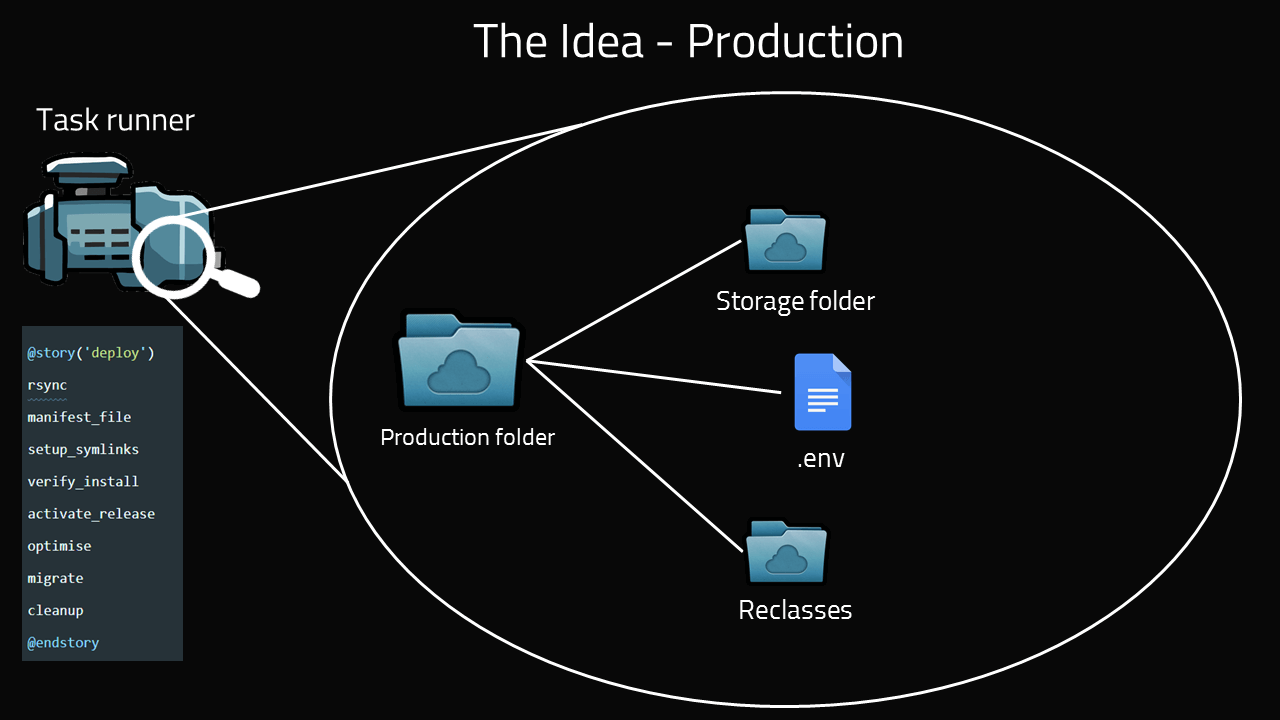 Envoy.blade.php has 2 definition of "servers": 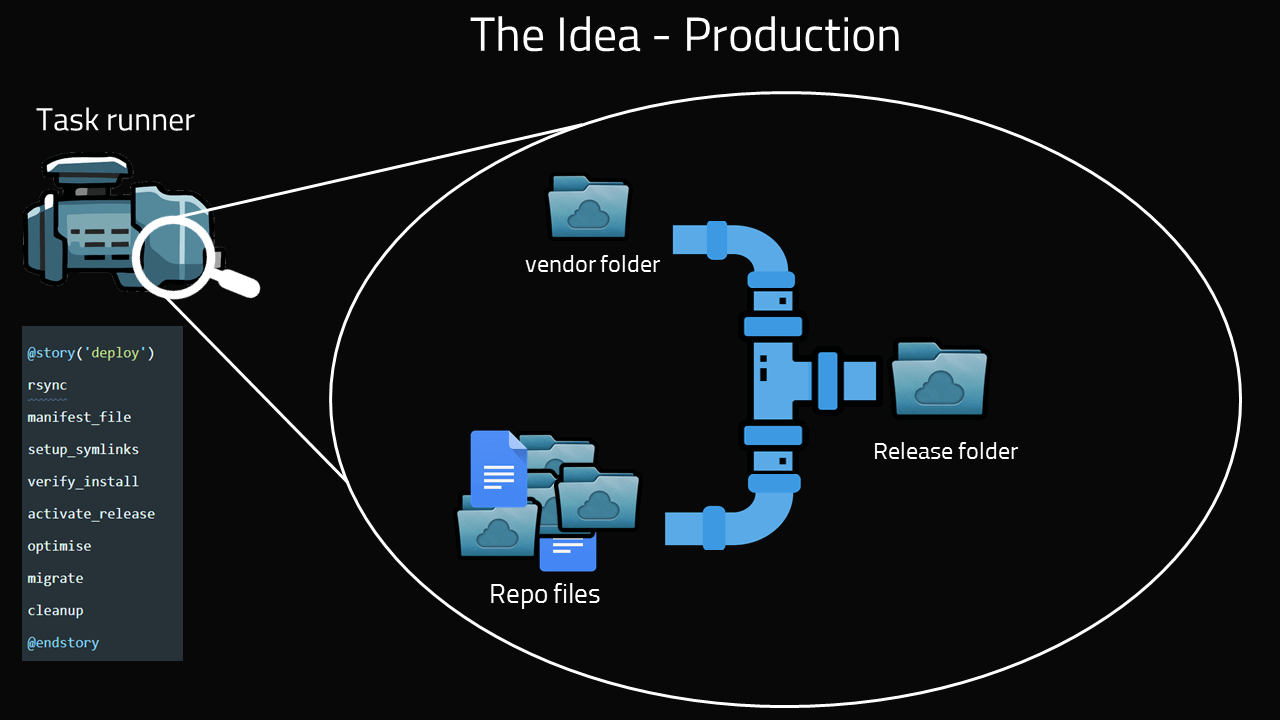 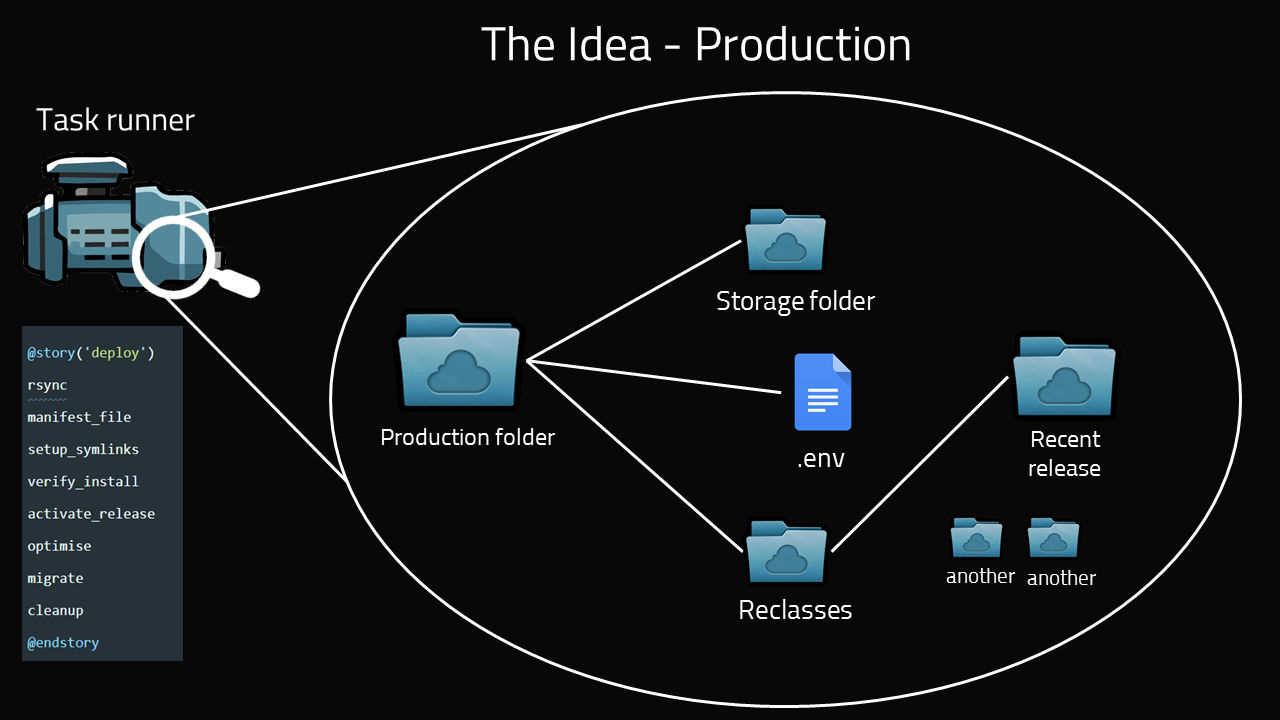 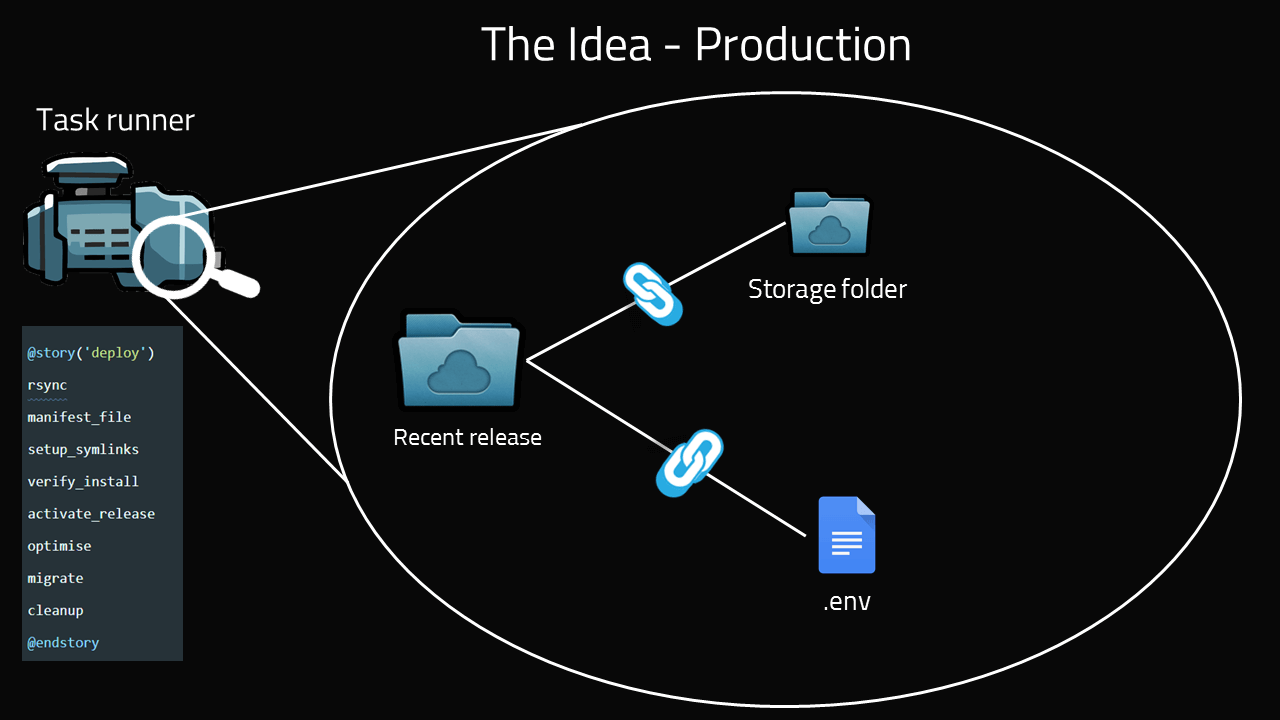 "verify_install", here you can do whatever you want to verify that the release is working properly. I chose a simple approach and ran artisan --version. 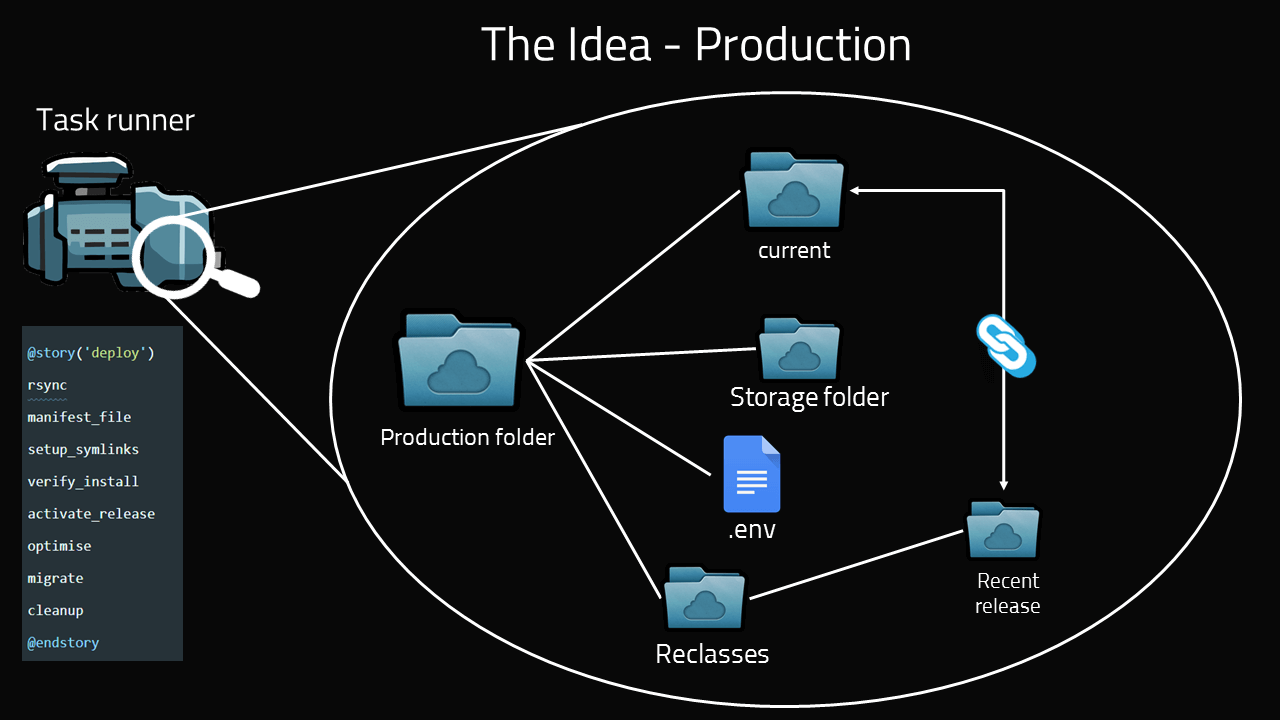 You have to configure your server (Nginx/Apache) to point your domain to current/public symlink. Typically found in path-to-production-dir/production/current/public 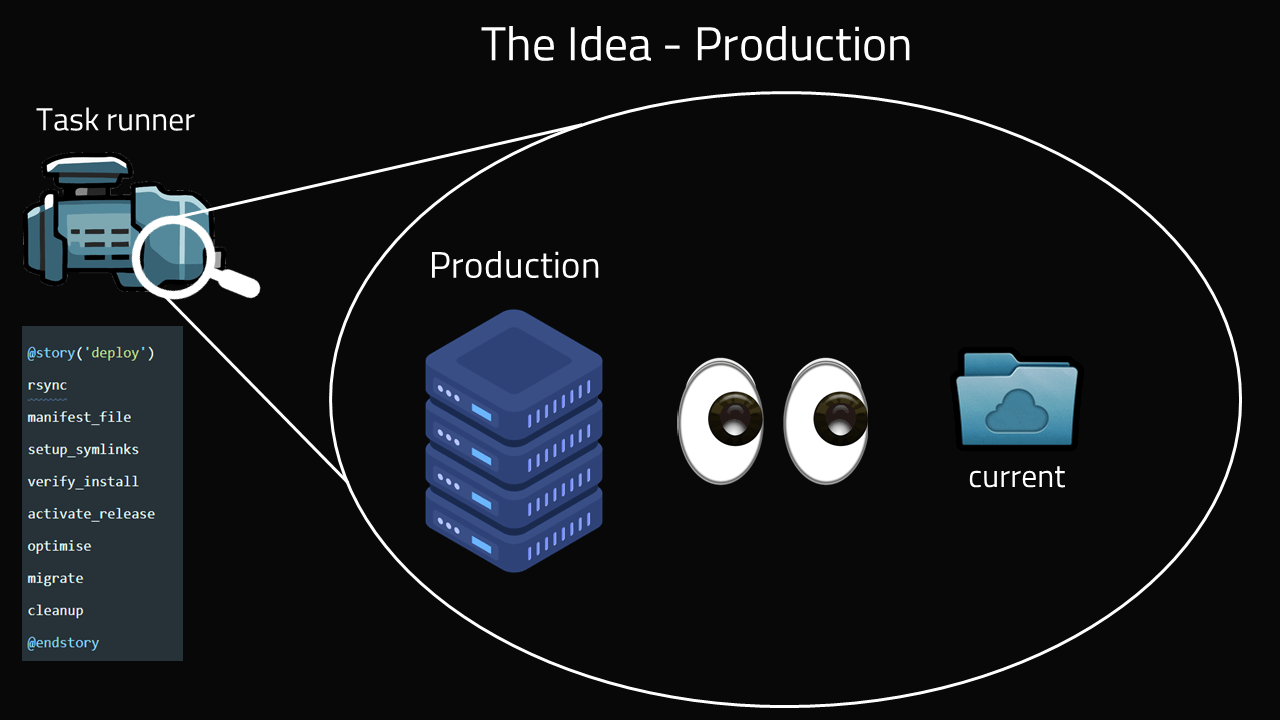 "migrate", Do any database related things in this task, note that I'm using --force flag in the migration command because we'll be in production environment.

"optimise", Any optimization tasks like clearing caches and recompile views.

With any luck, every push to "master" i.e. production branch will be uploaded as separate new release. The magic here relays in current symlink that will point to the most recent working release. This happens instantly so you'll achieve zero-down time upgrade and in the same time allows to rollback to previous releases whenever needed. How cool is that! 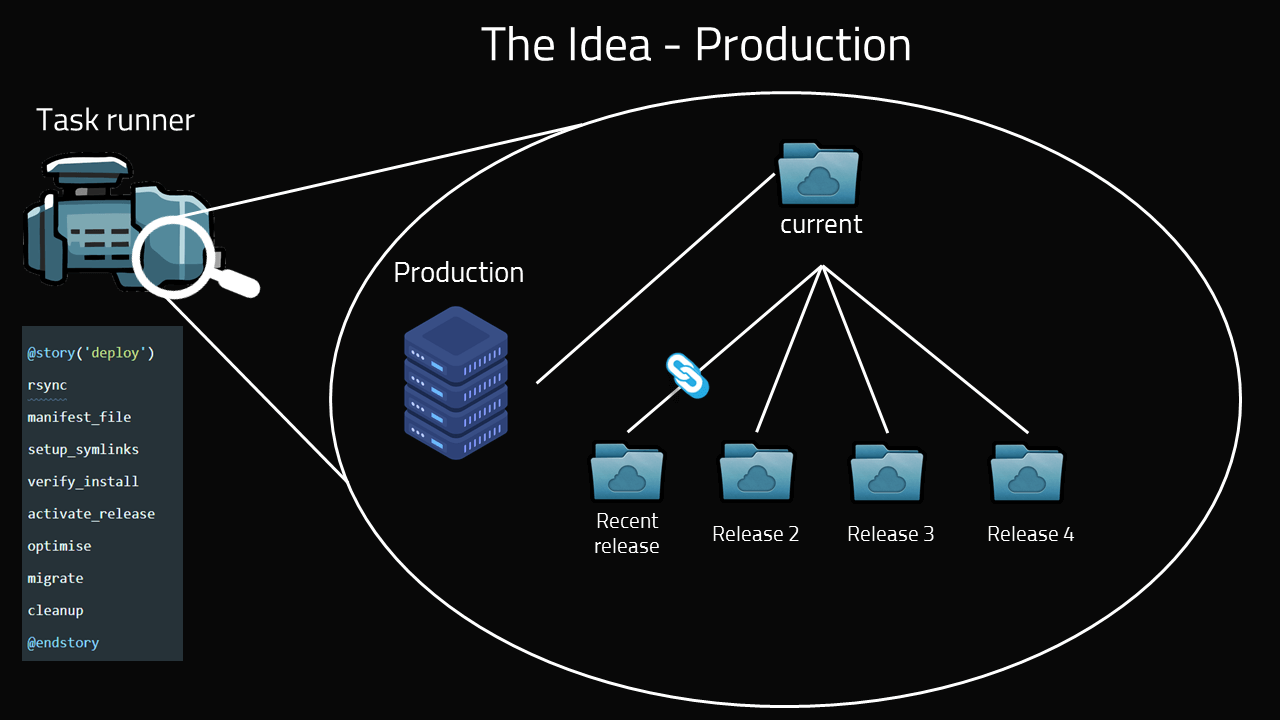 Let's go deep in it line by line:

It was important for me that production pipeline runs very fast, no more than 2 mins, so here I'm using optimize docker image containting just enough to run php 7.4 environment, of course you can miss around with different images but I found this the fastest amount them.

definitions key will define any steps or variables that we'll use through out the pipeline execution run.

First I defined compser install step which will

It's important to run optimized composer install because this is a production env vendor folder will be much smaller.

In pipelines key you'll define the defult behavior for each branch.

You don't have to use bitbucket in any pipeline implementation like Travis CI or GitHub actions will do just fine as long as the pipeline will have an ssh access to the server to run Envoy (opens new window) and excute the tasks.

Comment bellow if you have any question or say Hi on twitter @nagiworks (opens new window), I would be more than happy to help.

Ahmed Nagi - Powerd By Vuepress. Hosted with GitHub and Netlify.